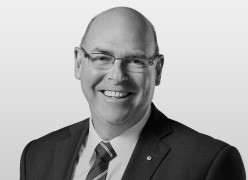 Peter works with Steople as a Special Advisor having spent over 30 years as an Army Officer in the Australian Defence Force. Peter has extensive operational, command and leadership experience having commanded at all rank levels up to Brigadier. Peter has held key positions as the Senior Personnel Officer for the Army’s First Division as Lieutenant Colonel and on promotion to Colonel he oversaw personnel support to Land Command, responsible for all of Australia’s Field soldiers.

His personnel experience culminated in his last position as the Director General Personnel for the Army. He considers this position as a significant milestone and counts Army’s cultural reform and the development of policy changes to Army’s wounded, injured and ill program as career highlights.