Steople (PeopleScape) are thrilled to have been named winners of the Organisational Development Award with Western Health at the APS 2019 Workplace Excellence Awards. The award recognises our ground-breaking SCORE program, developed by Professor Michael Leiter from Deakin University and delivered at Western Health by a team of Consultants from Steople. 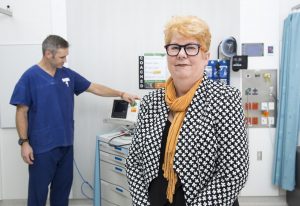 The SCORE Program: Strengthening a Culture of Respect and Engagement

The SCORE Program (Strengthening a Culture of Respect and Engagement) consists of 5 sessions run approximately 2-4 weeks apart. Specially trained Steople Consultants co-facilitate each session with an employee from the organisation who is trusted and respected by the workgroup. A baseline measure of competencies is established using an online pre-program survey which is later compared to survey data that is collected following the final session to recognise the changes realised by each team.

Why is this program important?

The program aims to promote a culture of respect and engagement within each team. It is based around Professor Leiter’s research into workplace civility and burnout.

Incivility is usually low intensity behaviours including little things like eye rolling or poor body language. Research suggests that a single incident of incivility can result in a 48% decrease in work effort, a 47% increase in absenteeism, a 63% decrease in productivity, and many more negative outcomes (Pearson and Porath, 2009).

You expect people to behave professionally at work and to a large extent they do, however one rude encounter can ruin your day. Some encounters are very unpleasant and have a huge personal impact. Even when they occur rarely, they have the power to shape a workgroup’s enduring culture.

How does the program work?

SCORE targets the workgroup culture by helping them to build positive interactions and improve how they work together. Essentially the program begins by building the workgroup’s level of psychological safety and then seeks to understand the “fast thinking” inconsiderate behaviours of the group. We use “slow thinking” (see Daniel Kahneman’s work) to examine the group’s unhelpful norms and behaviours and build new skills and helpful habits, which ultimately move back into our more helpful “fast thinking” and considerate habits as a team.

How did Western Health put this into practice?

Western Health runs three major public hospitals in Melbourne’s fast-growing and culturally diverse western suburbs. After a scathing 2015 Victorian auditor-general’s report on the health sector’s poor management of bullying and harassment, Western Health launched a positive workplace strategy, called ‘Don’t Walk Past’. This strategy combined with a range of educational initiatives on each person’s responsibility to manage themselves and speak out against inappropriate workplace behaviour, and annual surveys of Western Health’s 6500 staff, had generated improvements but hadn’t effectively tackled the whole team approach.

This is when Steople introduced Western Health to Michael Leiter’s SCORE program and the results are extremely promising. Suellen Bruce, the Director of People, Culture and Communication at Western Health sent out a baseline survey to the five groups that agreed to take part in the initial trial. The two groups with the highest response rate and lower levels of civility were selected in the first wave of the SCORE program.

Preliminary results show that the two groups have improved significantly more than the control groups who did not participating in the program. This includes significant improvement in supervisor trust, co-worker trust, and management trust. Attendance of the first three non-compulsory sessions also exceeded 90% which shows exactly how supported the participants felt throughout the process.

We have worked closely with Western Health to ensure the initial behaviour change is now sustained over time. We have continued to monitor ongoing outcomes, shared the results and encouraged them to take action in an ongoing way. Civility has been kept on the agenda, even at the Board level, and policies have been created to maintain the new more positive team norms and behaviours as the program is offered to other teams in crisis.

In the end, it all comes down to respect. As the Australian workforce becomes more diverse in culture and age, it is important that we understand what respect looks like for each individual. It is not enough to just stamp out bad behaviour within the workforce through redundancies and restructures. Organisations need to actively encourage positive interactions between employees to make sure their staff are fully engaged. This will enable employees to achieve maximum levels of productivity and performance.